Create an Account - Increase your productivity, customize your experience, and engage in information you care about.

The City of Whitewater created Tax Incremental Districts (TIDs) under the authority of Wisconsin Statute Section 66.1105 primarily to promote the orderly development and redevelopment of the city. The construction of streets and utilities are needed in order to provide incentives for industrial, commercial, and residential mixed-use growth, as well as to stimulate private sector development throughout the TID. The new development and redevelopment, which will occur as a result of the projects undertaken within the District boundaries, will provide the City with an additional tax base and provide employment opportunities.

Tax incremental financing (TIF) is the most effective tool Wisconsin cities and villages have to spur economic development and job creation. Municipalities have been using TIF successfully since 1975. The TIF process allows a municipality to pay for public improvements and other eligible costs within a designated area, called a tax incremental district (TID), using the future taxes collected on the TID’s increased property value to repay the cost of the improvements. The rationale behind TIF is that the public investment will promote private development, jobs, and tax base growth that would not otherwise occur absent the TID.

The success of TIF in Wisconsin is impressive:

• As of August 2015, there were 1,128 active TIDs in Wisconsin. Since their inception, these TIDs have generated a combined increment (growth in property value) of over $16 billion or $14.4 million per TID, with the mean TID age being 11.93 years.

• The average TID active in 2015 has added $1,214,776 to the tax base per year since its creation. (Note: this figure represents tax base generated within TIDs, and does not account for increases in value in neighboring areas occurring because of the TID growth.)

• 447 TIDs have been terminated in Wisconsin since 2000, adding nearly $9 billion of new value to the tax base.

Click to be redirected to State of Wisconsin TIF Rules 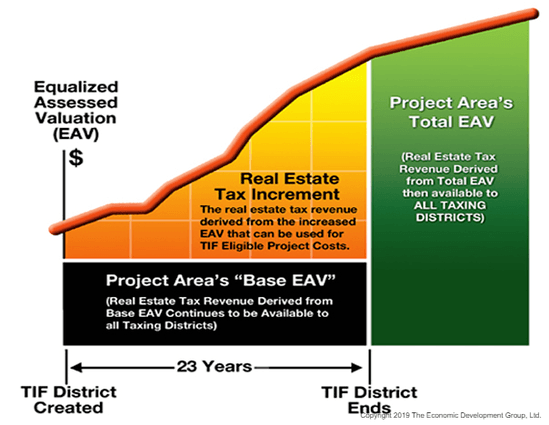